FROM CRISIS TO LEVERAGING OF OPPORTUNITY

There are not many occasions in the history of a nation when the opportunity to change the development trajectory is leveraged. This landmark has been set in India with the focus on localisation of development with the emphasis on Atma Nirbhar Bharat (Self-reliant India).

This is a radical thinking to change the course of economic development in India. The key element of the strategy of autonomous development is the creation of such an economic structure that is best suited to the quantity and quality of all resources available in the country. In the backdrop of this vision of the Prime Minister, measures like a self-reliant development of the national economy based on its own resources, cooperation and collaboration between public and private enterprises and restitution of MSMEs and rural economy have been made integral part of the strategy.

This effort addresses the sequencing of economic reforms, a debate that has been up for intense academic and policy discussions since 1991. The slow rate of growth of Manufacturing Value Added (MVA) in India and stagnation in its share in GDP, have attracted major discussions all across. Lance Taylor once observed that sequencing of economic reforms is as important as the reforms themselves. Somehow in the last several years, imports have multiplied and the industrial output and net value added, have declined.

In his third address on May 12th, Prime Minister Narendra Modi announced a ₹20-lakh crore economic relief package titled Atmanirbhar Bharat Abhiyan. The total stimulus of Rs 20,97,053 crore included the earlier measures announced by the Reserve Bank of India (RBI) worth Rs 8,01,603 lakh crore and Rs 1,92,800 crore announced by the government under Pradhan Mantri Garib Kalyana Package (PMGKP). The details of the relief package were explained by the Finance Minister Nirmala Sitharaman over five days from 13th to 17th May. The endeavour was to address some of the major challenges the economy is likely to confront with exit from the lockdown as well as those emerging from the issues like reverse migration and supply disruptions.

The first tranche, aimed at micro, small and medium enterprises (MSMEs), non-banking financial companies (NBFCs) and some individuals was announced by her on Wednesday. The major actors and sectors that the five press conferences covered, form an extremely exhaustive list of issues covered in the package. Among the key actors in the economy, the State governments have been arguing and supporting for greater financial maneuvering space. Business, financial institutions, housing and agriculture and farmers may be the key actors in the changed policy paradigm [Is it okay!!]. Big focus on migrant labour has been a major highlight of the present policy. Efforts have also been made to bring-in community participation though cooperative banks and Regional Rural Banks, self-help groups, dairy cooperatives and fishermen organisations. Power sector beneficiaries include DISCOMs across states and in the Union territories as well. Infrastructure includes agricultural and rural sectors.

At the global level, we find that India’s response matches with other nations in several ways. Though country specific packages vary in size, scope and sequencing, the sectors covered for policy intervention are more or less similar. The fiscal, monetary and macroeconomic policy interventions covered in the country packages are meant for ensuring adequate supply of medicines; equipment and heath infrastructure; vaccine development; relief to unemployed, vulnerable and sick persons; ensuring essential supplies; food safety and security; tax relief; credit flows to small and medium businesses; debt moratorium; lowering of policy rates; and most importantly ensuring adequate flow of liquidity in the economy and preserving capital in the banking system through repo rate changes, asset purchase, and reduced reserve requirements. The size of fiscal stimulus packages are very high for certain countries such as Japan (21.1per cent), Belgium (13.5 per cent), Iran (13.7 per cent, Singapore (91.3 per cent , US (11 per cent , Hong Kong (10 per cent ), among others. For developed countries and emerging markets, the size of fiscal stimulus ranges from 3 per cent to 8 per cent , whereas for some African and South Asian economies it is reasonably low. Combined fiscal stimulus package for India

stands at over 11% of GDP, which is reasonably high considering India as an emerging country.

There are two other important factors. First, India requires an institutional mechanism of funding long-term projects with high capital. Since the privatisation of IDBI and ICICI, India has lost on industrial development financing to a large extent. The arrangements that have come up have failed in refinancing and extending risk support. The informal sector is very important for manufacturing production in India. However, very often dynamism, particularly in the exploitation of economies of scale and technological upgradation, depends on the performance of large companies, which are facing slow increase of the capital stock. Second, the RBI should be encouraged to work closely with PSBs to do the necessary deep dives for stimulating industrial growth. Government support to PSBs should not be taken for granted. 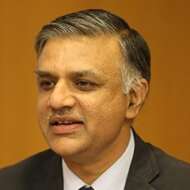 Prof. Sachin Chaturvedi Prof. Sachin Chaturvedi, is Director General at the Research and Information System for Developing Countries (RIS), a New Delhi-based Think-Tank. He works on issues related to development economics, involving development finance, SDGs and South-South Cooperation, apart from trade, investment and innovation linkages with special focus on WTO. He is also Member, Board of Governors, Reserve Bank of India.
« Previous PostTo Next Post »

KNOW ABOUT THE GOLDEN BLOOD TYPE